Here at Sawdust City, we're always up for adventure.  We've got the pioneerin' spirit deep in our hearts and we're gonna reflect that in beers we brew.  Sure we'll have our mainstays, 5 brands which we feel have a little bit of something for everyone and we hope you'll come to know them quite well.  But once the dust flies, we're gonna start trudgin' out and brewing beer in styles from all four corners of this here earth.  So posse up and come a pioneerin' with us!

Golden Beach Pale Ale -
A hoppy American Pale Ale, unfiltered and brewed with 50% wheat malt, this easy drinking ale is brimming with flavour and perfect for a summer's day. Using a blend of 4 aromatic hops; summit, mosaic, galaxy & sorachi ace, this beer will satisfy your inner hop head while not knockin' you over with a high ABV. 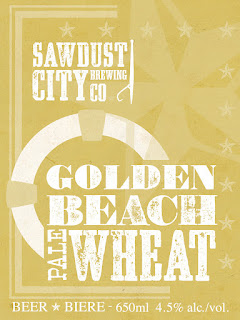 Lone Pine IPA -
Our interpretation of an American style West Coast IPA. Loaded with mounds of delicious hops and perfectly balanced with a blend of 4 malts. If you like big, in your face American hops...well then, this beer is for you! (AVAILABLE AT THE LCBO)
https://www.lcbo.com/lcbo-ear/lcbo/product/inventory/searchResults.do?language=EN&itemNumber=339531 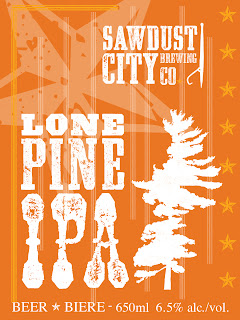 Ol' Woody Alt -
A traditional German lagered ale, Ol'Woody is a brewed in the style of a Dusseldorf Alt. With a rich malt body and a snappy hop finish, this ale is the quintessential session beer.  Ol'Woody's got a fantastic bready, nutty malt body but an easy drinkability that will bring you back for a second pint. This ale pairs wonderfully with a second one! 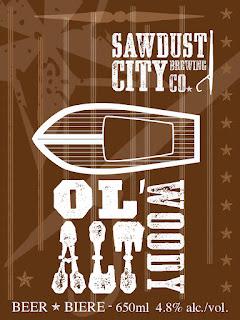 Skinny Dipping Stout-
A chocolaty, silky smooth oatmeal stout, this ale was made for those cool Muskoka nights.  Aromas of delicious roasted malt, chocolate and coffee leap from the glass and bring you in for the first sip. Then it drinks like chocolate milk for adults! Made from a blend of 7 different malts, Skinny Dipping Stout is not overly heavy, but its bursting with rich malt flavours. This ale is perfect along side robust meals or fantastic just on it's own. 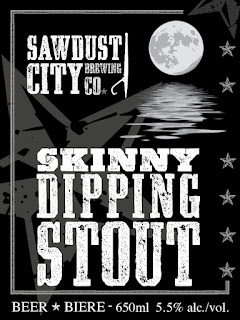 
Gateway Kolsch-style ale-
Another lagered ale, this time from Koln, Germany.  Gateway is brewed like a traditional Kolsch-style ale. Using only German malt and hops, this ale will transport you to right into the hearth of Koln, it's like your drinkin' on the steps of the Kolner Dom.  Light malt body with a snappy nobel hop finish, this ale is a refreshing summer slammer or the great start to a long session! 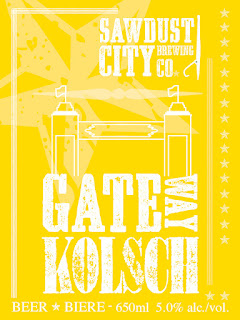 Like I said, we here at Sawdust City have the pioneerin' spirit.  So to compliment our mainstays, we've come up with a few ideas for our "Seasonal" releases.  We call them "Seasonals", because here in Muskoka, our seasons are defined and unique.  Each one has it's own spirit and brings something different to the table.  So to commemorate our 4 beautiful seasons, we will be brewing beer that we feel demonstrate all that is wonderful about each of our seasons.  Take a gander at some of the lovely seasonals we've come up with so far! 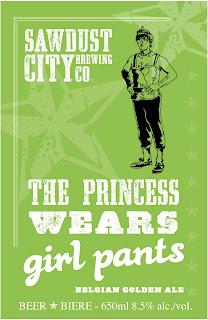 "The Princess & Girlpants Meet The ODB" - Our Belgian Golden Aged in oak barrels containing all sorts of bugs and what not.  It gives a nice oak character to our Golden Ale along with a fruit and funk from the bugs. 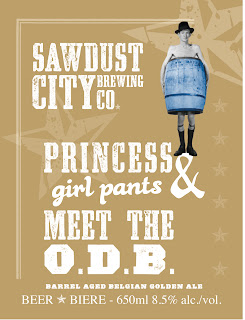 Fall - "I Swear Sugarpants, it was Your Idea!" - A brown ale with lactose sugar added. With a chocolately body and brewed with a Masala spices to give it a Chai latte flavour, this unique brew will give you something to warm your hearts on those cold fall nights. 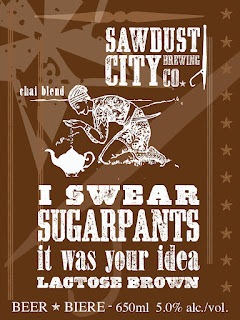 Winter/Spring -
"Long, Dark Voyage to Uranus" - A Uranal Imperial Stout.  A bold beer, brewed with lots of roasted and chocolate malts, with a touch special sugar added in to give that little something extra.  Just the thing to curl up with while the snow flies! (AVAILABLE AT THE LCBO THIS FALL) 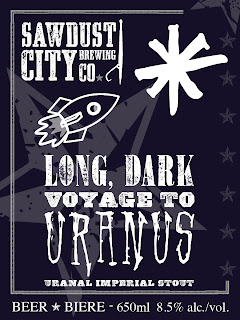 "Long, Dark Voyage to Uranus Whiskey Barrel Aged" - we made awesome...awesomerer! Our Imperial Stout aged for a month in Scotch Whiskey Barrels.  Smoke and chocolate. 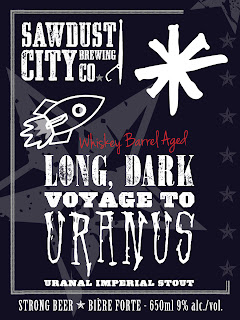 "Bloody Long, Dark Voyage to Uranus" - The newest member to our LDV family, this dark chocolate treat now features the bright, tart flavours of raspberries. At 9.7% abv and loaded with everything you love in our regular LDV, this new addition just gives you more to love...like you needed another reason to love Uranus! 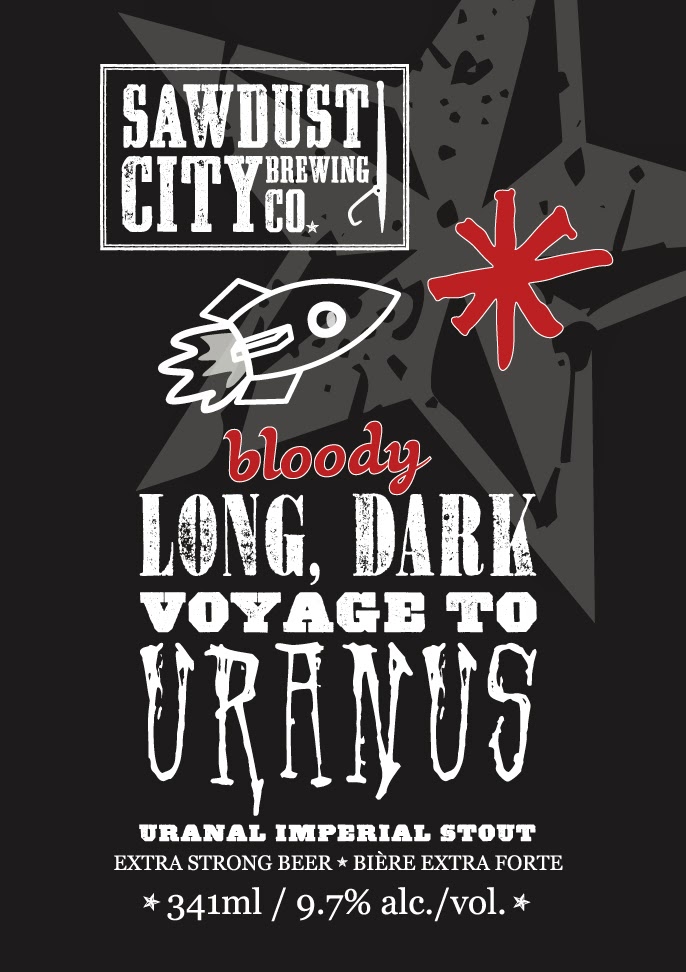 "Red Rocket Stout" - A delicious blend of stout, coffee and spices.  Made in collaboration with our friends at Red Rocket Coffee in Toronto's East End we took our Stout and added their coffee along with healthy doses of Cinnamon, Vanilla and Cayenne Pepper.  Yep.  We did that. 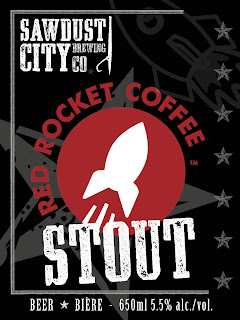 "Kolsch '45" - Using our Gateway Kolsch as a base beer, we stuffed it into some Chardonnay and Gamay barrels and let them age for about 4 months. With 45 days to go, we through in 8lbs of locally grown cranberries into each barrel. The result is a light, refreshing, slightly sour, slightly tart wonder. Brimming with mouth puckering goodness, this 5% beauty is loaded with flavor! 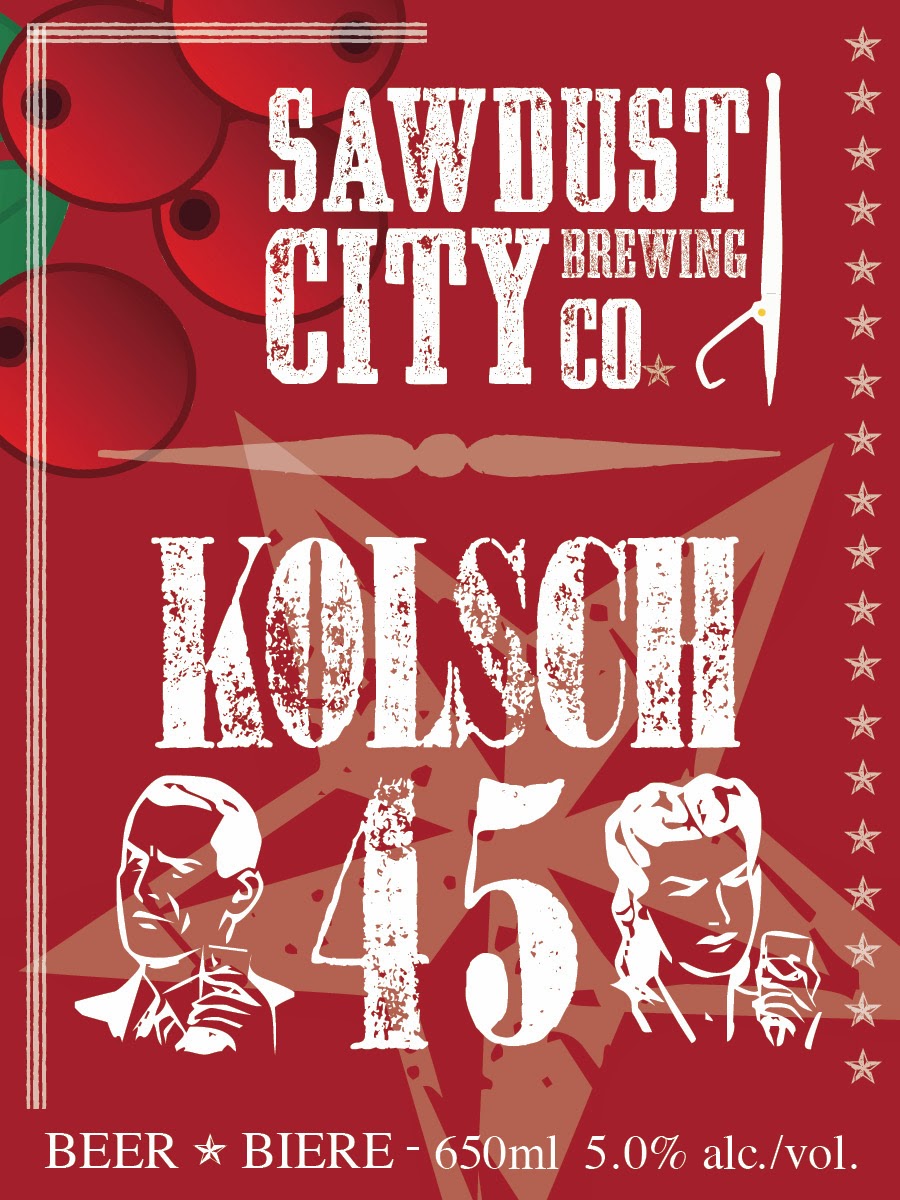 "The Futhered Muzzy" - Born from the mind of Monty Bertin, (winner of this years Mighty Mustache competition at The Only Café and holder of the coveted Golden Cant Hook Award) this malty masterpiece is a mash-up of a Belgian Brown and an Irish Red Ale. It's a Belgo-Irish Brownish Ale. Belgian upfront with some nice spice though the middle, it all comes together in a in a sweet, malty, nutty finish. 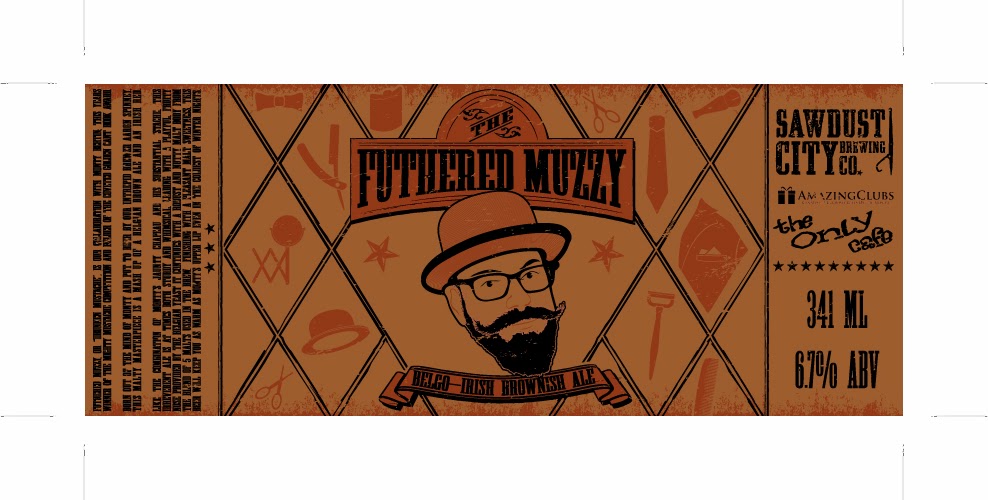 Nothing is set in stone as they say, so as we will plan on brewing these on a continuing basis from season to season, there's a good chance other beers as well as variations on these beer will be popping up from time to time.  It's craft beer for cryin' out loud! So we'll craft something.