How Do You Say Monkey in Latin?

But wait, I'm getting a little ahead of myself.  First things first, let's talk about last weekend before we get to next weekend. 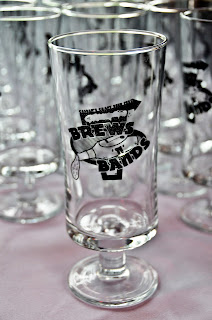 Last Saturday was the 1st annual Brews'n'Bands Festival at The Casbah in Hamilton.  A great beer bar / concert venue, The Casbah brings together two of our favourite things on a regular basis, indie music and craft beer.  But the Brews'n'Bands Festival was the first time they jammed the place, with 16 craft breweries and 5 bands, 4 food vendors and 1 radio station in one solid day of gloriousness. The Casbah's two levels were over flowing with beer and beer lovers and Sawdust City was there to witness....and to pour 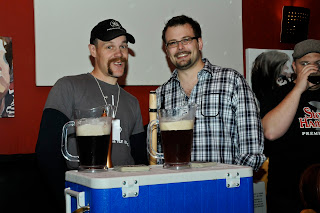 Ol'Woody and COCKpuncher made the trip down to Hamilton.  No, the two DUDES are Sam and Sean, the BEERS are Ol'Woody and COCKpuncher.  Ol'Woody Alt, one of our 5 mainstay brands was tasting great and pouring well, but it tended to attract a more reserved crowd.  While COCKpuncher IPA an 8.5% massive IPA we brewed with our good friends at the the IndieAleHouse in Toronto, brought the rock and pulled in the more adventurous drinker.  A little ying and yang thing goin' on. 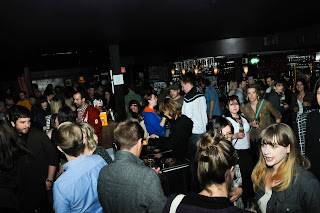 By early afternoon The Casbah was filled with revelers.  Beer lovers and music lovers coming together as one to enjoy the scene.  The beer was flowing and the first act, (one of my personal favourites) The Sadies took to the main stage at 4pm.  I may have left Sean to handle the pouring duties for a while... 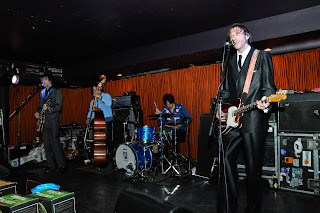 After The Sadies rocked the stage, I headed down to do a little radio spot with 108 FM to talk Sawdust City and the growing craft beer movement in Ontario 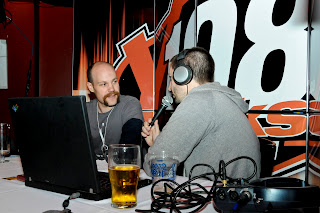 And that was just the first session!  Session 2 started at 6p and brought in even more great indie music with The Wooden Sky, headlining.  A whole new crew of beer and music lovers made there way through the Casbah, sampling the wares of some of Ontario's finest breweries 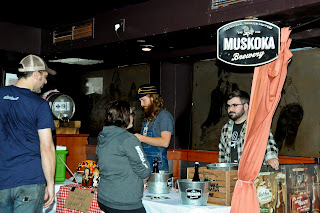 D-Money in the house! 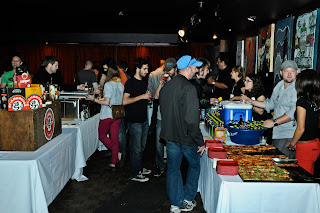 All and all it was a good day, but seriously, how can you not have fun with that much awesome music and amazing beer under one roof...it's pretty much impossible not too.  Brodie, the owner of The Casbah has big plans for this festival and with one successful year under his belt, I can't wait to see what he has planned for next years fest.  What ever he does plan, if they'll have us, Sawdust City will definitely be back 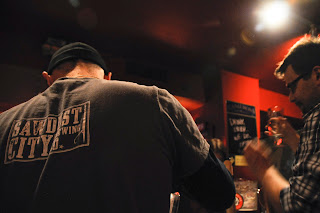 So what of all this latin monkey talk?  Well a few weeks ago, Frederick from Microbrasserie Charlevoix, Simon and John from Black Oak and yours truly from Sawdust City got together and brewed a special commemorative collaboration brew for the 10th Anniversary of the Canadian Brewing Awards.  This was first time a beer had been made specifically for this event, so we wanted to do something special.

What we came up with was a pretty unique brew.  A Dubbel IPA.  We've seen Belgian IPA's before, that's not really anything new, but what we wanted to do was take the DNA of a Belgian Dubbel and cross it with the DNA of an American IPA to not create and exact hybrid of the two distinct styles, but a whole new animal, unlike any seen before. So along with the old, we also wanted to throw in a dash of the new.  A little of the unknown into two styles we were pretty familiar with.  So we elected to use a few new varieties of hops that we had not used in the past to see what they`d bring to the table.

This was an experiment after all.  The outcome could have been an abomination onto beer.  An ungodly mistake, one that should never have been released to man.  But we were willing to take that chance and venture into the unknown.

So using the malt and yeast body of a Belgian Dubbel we added in the hop profile of an American IPA and what we ended up with was, `How Do You Say Monkey in Latin` .  Continuously hopped for 60 minutes with a boat load of Galaxy, Nelson Sauvin and Legacy hops, then dry hopped with another boat load of the same hops, Monkey turned out like nothing we`d ever tasted before.  Not really a Dubbel and not really an IPA, this beer has massive aromas of berries and wine, with just a hint of banana lurking around in the background.  The flavour is much of the same, some sweet malt melted into blackberry jam and red wine. Quite unique, and yet very drinkable....and at just under 7% abv, that could be trouble.

Oh yea, we also wanted to make this as Belgian as we could, so we bottle conditioned the brew as well.

But there isn`t much to go around so you`ll have to make the trip to Montreal to try this unique one-off brew and get your commemorative bottle in the CBA gift bag.

Big thanks to all the suppliers who generously donated to the brew - G & P  for the malt, Hops Direct (Beer and Wine Filter) for all the hops, H.Moore Printing Services for the amazing labels and United Bottles for the bottles.

Anyhoo, that just about does it for now.  Until next time, keep the beer in your mugs and the sawdust beneath your feet.
Posted by Sam Corbeil at 03:59